What is Caci Dance?

Caci dance is played by two male dancers who dance and fight each other by using a whip and a shield as a weapon. It is often performed at various events such as during the harvest season (hang woja), new year rituals (penti), and various other traditional ceremonies.

The origin of the Caci Dance

According to historical sources, this Caci dance originated from the tradition of the Manggarai community where men fight one on one to test their courage and agility in fighting.

Later, this dance then developed into an art where there were dance moves, songs and accompaniment music to enliven the event. The name Caci Dance itself comes from the words "ca" meaning "one" and "ci" which means "test". So caci can be interpreted as a one-on-one dexterity test.

The Meanings and Values Found in Caci Dance

As for its function, this dance is a medium for Manggarai men in proving their manhood, both in terms of courage and dexterity. Although contained in it the element of violence, this art has a message of peace in it such as the spirit of sportsmanship, mutual respect, and resolved without a grudge between them.

This is to shows that they have the spirit and spirit of heroism in themselves. Caci Dance Performance The Caci dance is performed by a group of male dancers armed with whips and shields. In the show, a group of dancers are divided into two parts and competed one on one.

Before the dancers are competed, the performance begins with the Tandak Dance or the Manggarai Danding Dance.

The dance was performed by male and female dancers as the opening act and enlivened the Caci Dance performance. After the opening dance is finished then proceed with the Caci Dance attraction. When both dancers will enter the arena, the dancers first warm up by performing dance moves.

Then they challenged each other while singing traditional songs, then the match began. In this attraction there are also some rules, players can only hit on the upper body of the opponent such as the arms, back, or chest.

In addition, dancers must be able to fend or avoid the opponent's attack. If not, then he will be hit by an opponent's attack and leave scars on his body, even bleeding. The defender will be declared defeated if he is hit in the eye. After all the dancers have been played, then the two groups are gathered and do a handshake or embrace as a sign of peace and there is no revenge between them.

In this Caci dance performance is usually accompanied by traditional musical instruments such as drums and gongs, as well as the song of the nenggo or dare from the supporters.

In the show each group usually has their own supporters. Like a sports match, the supporters also cheered to give support and encouragement to the dancers in order to win.

In this Caci Dance performance, dancers also use costumes like soldiers who will advance to the battlefield. dancers' costumes usually only use a head covering (base) and clothing at the bottom only, so that the upper body is naked.

The dancer's head covering uses a mask made of hard buffalo skin to protect the face from the opponent's attack. Whereas the lower body uses white trousers and a special Manggarai songket cover in black.

As accessories are given sleighs that sound following the dancers' movements. In addition, dancers carry whips and shields as weapons, which are made from buffalo / cow leather that has been dried.

The Development of the Caci Dance

This Caci dance is one of the well-known traditional arts and is still preserved by the Manggarai community on Flores Island, East Nusa Tenggara.

This art is also often performed in various events such as the celebration of the harvest season (hang woja), new year rituals (penti), the reception of large guests, and various other traditional events. That is the introduction of "Traditional Caci Dance from Manggarai, Flores, NTT".

Hopefully it will be useful and increase your knowledge of traditional arts in Indonesia.
#Berita Utama
Bagikan
Komentar 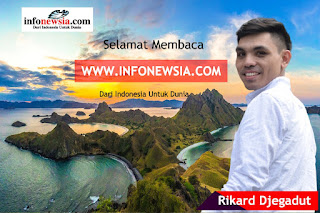